I've just finished installing Windows 7 on a system with an ancient video card – GeForce2 MX400. It wasn't very easy, so I decided to write down my experience to the blog.

Of course, NVidia didn't release Windows 7 drivers for this card and they're not going to: 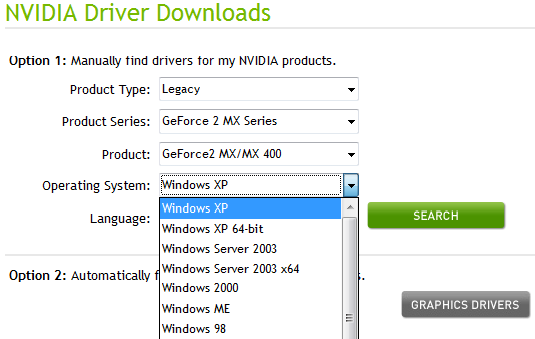 But anyway I decided to test my luck and downloaded drivers for GeForce2 MX (version 93.71) for Windows XP. They installed succesfuly under WinXP compatibility mode

and even worked for some time until I decided to test video playback on the fresh system. The system crashed after that and showed a blue screen of the death with complaints on nv_mini.sys

Becasue of the first two letters of the driver name ("nv") I understood that problems were in the video subsystem.

I had searched the Net and found the following advice: if one wants to run GeForce2 MX with Windows 7  then they should try version 71.89 of drivers, which you can download from NVidia site: http://www.nvidia.com/object/winxp_2k_71.89.html

Everything works fine after installing the last-mentioned drivers (even NFS Undeground).