Hello! My name is Artyom Bisyarin. I am from Kiev, Ukraine. This lesson is for week 1 of Introduction To Music Production at Coursera.org, and it's about timbre.

There is a sound parameter that is hard to explain with words and very difficult to measure.

But sometimes we say that a sound is saturated or dim, dark or bright, dense or dry. Those are all attempts of describing the timbre of a sound. The timbre doesn't have any particular unit to measure it in, and it's nearly impossible to describe the result of a timbre measurement in a few words.

Actually, why can we hear the difference between two identical notes played on two different classical guitars? Why could one of the guitars have dense, saturated timbre and the other have dry and dull sound, if the note and the octave are the same? 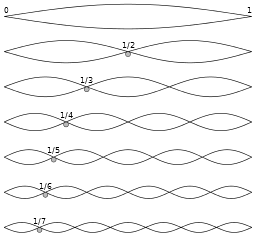 The reason is in overtones. The sound is vibrations of a physical object, e.g. a string. A string vibrates not only involving its full length (producing the fundamental tone), but also involving its half (producing the first overtone), and its third part (producing the second overtone), and so on. Thus, besides the fundamental tone, there are always some overtones in a sound (see the picture). These partials always have pitches higher and amplitudes lower then the pitch and the amplitude of a fundamental tone. We don't perceive overtones as different notes, but they give sounds their uniqueness. They give them their timbre.

The main part of timbre formation is played by overtone amplitude characteristics. Going back to our example, if a guitar is made of a type of wood that amplifies the first and the lowest partials, then it can have dense and deep timbre. On the other hand, if the wood emphasises the higher partials, then a guitar may sound dim and dry. There are a lot of other factors that affect the loudness of different overtones: strings, glue and lacquer used by the luthier, temperature and humidity of the environment, and the way you pluck the string, of course. 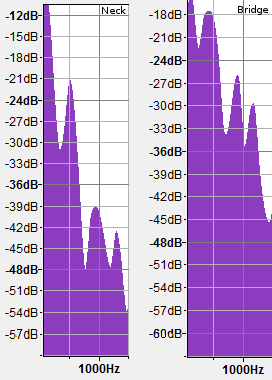 Right now, I'm going to show you the influence of the way one plucks a string on the overtone amplitude characteristics. Everybody knows that if we play near the neck of a guitar, then we get a dense, warm and mellow sound, and near the bridge, we have a sharp and dry sound. I will play a C at first near the neck, and then near the bridge on my classical guitar. After that we will discover the differencies in overtones sound with help of spectrograms made in Audacity.

In the first graph, you can see a spectrogram of a note C plucked near the neck of a classical guitar, and in the second one, you can see a spectrogram of the same note plucked near the bridge (use the links to listen). In absolute numbers, the note played near the neck is louder (-12dB versus -18dB), but it means nothing. We are interested in relations of overtone amplitude characteristics, which actually influence the timbre.

The first peak on a graph is a fundamental tone. It's lower and louder than its overtones. The other peaks are overtones.

Now it's obvious why notes near the bridge don't sound deep and mellow. It's because the first overtone, which is very loud near the bridge, gives such notes a sharp timbre. I think this example nicely shows the key role of overtone amplitude characteristics in timbre formation.

When I sat to write the article I thought I was an expert in timbre. However some gaps in my knowledge were discovered during the process of writing, which were successfully filled with the new information. Today, for the first time in my life, I have used spectrograms consciously, and also I needed to recall how to use the Gimp raster graphics editor in order to prepare the spectrograms for placing in the article.

Thanks for your time. I hope the lesson helps. I'm looking forward for advice, corrections and comments.