My Lenovo Edge 430 broke down almost at the end of configuring a Linux server for a customer. I had a backup laptop a friend of mine gave me two years ago: Asus A6R. I decided to install FreeBSD on it for running ssh, so I could finish Linux server configuration. 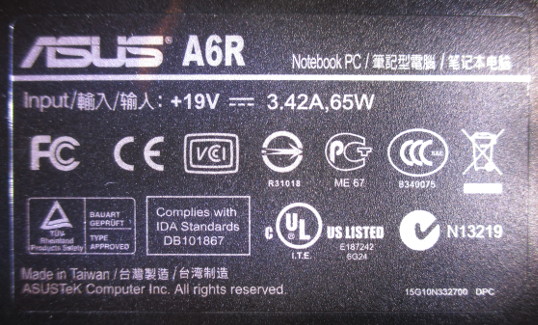 Why FreeBSD? I didn't know. Just had been missing it for several years.

By the way, Olya Churkina, thanks for the laptop. It really helps.

I just burned a DVD using FreeBSD 10.2 ISO-file from the official site, and performed a default installation. The only customisations I made on this stage were creation of a user named "user", and installing the Handbook. 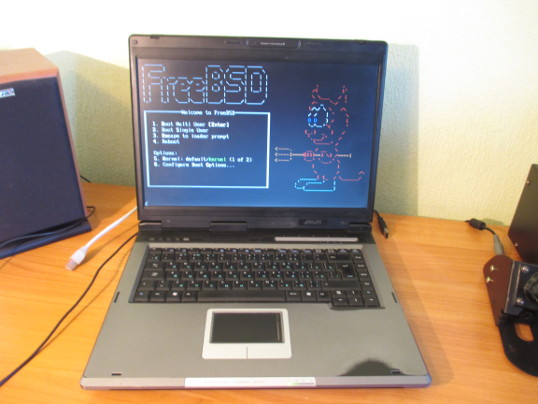 Oh, and for this nicely looking beastie I've added to my /boot/loader.conf:

At first, let's use the new virtual console driver instead of syscons by changing /boot/loader.conf:

Also, it's handy to load Kernel Mode-Setting video drivers from /etc/rc.conf for having video-mode set according to the possible screen resolution:

After rebooting we'll have sexy virtual terminals able to show more information on the screen than by default. 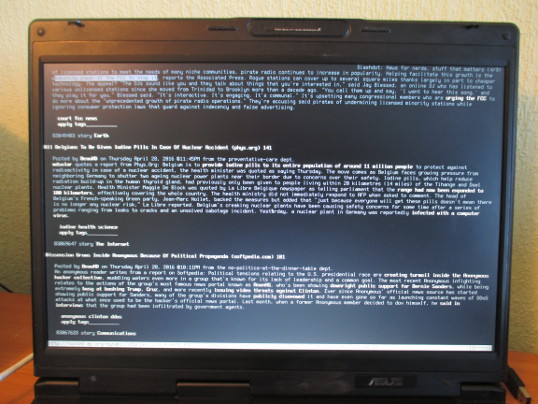 Our Broadcom chip is supported by if_bwn driver, but it requires installing firmwares from /usr/ports/net/bwn-firmware-kmod. So, let's go to the directory of the port, and type `make install` (or use any other way of installing you prefer). A file we need will be installed as /boot/kernel/bwn_v4_ucode.kld 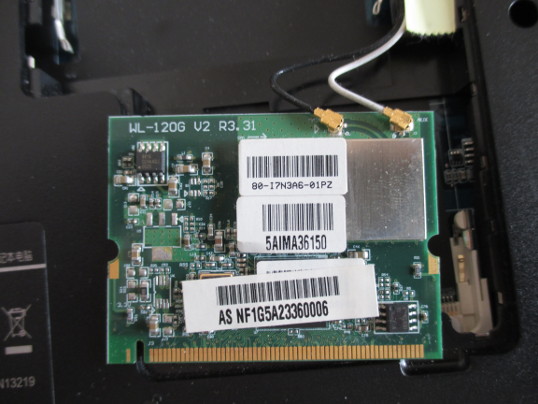 Now we need to activate the wifi drivers in /etc/rc.conf:

After a reboot we must see the two modules in the output of `kldstat`.

Also bwn0 network interface must be present in the output of `ifconfig`:

Next we need to create a wlan interface on top of bwn0. We are going to use WPA2, this is why before creating wlan0 we must load a module that allows programs providing wlan authentication mechanisms to work:

Then create wlan0 on top of bwn0:

As I understand, this is because the wifi-drivers are not "ACPI-ready". We need a working OS as soon as possible, so let's just turn off the ACPI driver by writing this into /boot/device.hints:

After a reboot we must see something like this in ifconfig's output:

On the first console we often get messages from bwn0 about decoding attempts. They can be safely ignored for now.

It's rather optional for some people, but I use NTFS on my flash-drive.

Install ntfs-3g from the ports (`pkg install fusefs-ntfs`), and add this line to boot/loader.conf:

As we must not work as root, let's provide our user with better experience.

For being able to run su as a user:

For shutting down the laptop:

For localization, add a new user class to /etc/login.conf (see which locales available using `locale -a`):

After /etc/login.conf editting we need to rebuild the binary representation of it:

Now, let's assign the new class "ukrainian" to our user:

Relogin as the user, and make sure commands like `date` and `ncal -y` print months and week days in your language (in non-X console, with the settings we've made, Unicode will be displayed properly only if you use the new virtual terminal driver).

Here we can stop, because now we have everything for getting the work of configuring the remote Linux server done. However, after a day of working in console mode I realized the need of something more sophisticated than elinks for Internet surfing. So, the next optional section is about running the X-server on Asus A6R.

Of course, we need xorg server:

If you're still using syscons, you'll have problems after running X server: all consoles will be blank when you switch to them (even after finishing working with X). So, now it's really time to put this into your /boot/loader.conf:

Concerning a window manager, I'm going to use shipped by default twm with my already ready configuration file downloadable from here. Just unpack the archive into your home directory, and write this in ~/.xinitrc:

After `startx` you're ready to go with a menu shown on left click. Edit this menu in .twmrc according to your needs.

Also, if additional keyboard layout is required, put this into ~/.xinitrc as the first line (switch layouts with Alt+Shift):

After installing Firefox from the ports, D-Bus must me enabled in "/etc/rc.conf":

For making copying between an xterm and other programs work properly (e.g. for selecting text in xterm and pasting it with a middle mouse click in Firefox), Unicode locale must be configured.

If you don't want to start xorg manually every time, it's possible to install X Display Manager:

Turn it on in /etc/ttys:

And use .xinitrc we just create as .xsession:

If we already have an X server, it's logical to configure sound on our FreeBSD system, but it also can be configured independently.

Just write this in your boot/loader.conf and reboot:

Nevertheless, if I had found an article like this before configuring the laptop, it would have saved my time. I hope it has saved a bit of your time. Also, if you know how to deal with the issues left, please comment this blog below.